My name is Raaga Mandala and I am a fifth grader at Jacob Wismer Elementary School. On January 8th, 2020, I was inaugurated as Oregon’s Kid Governor at Oregon’s Capitol Building in Salem.

My entire fifth grade class, my teacher, school principal, and vice-principal were in attendance that day. My grandparents flew in from India, and my uncle from California, specifically for this occasion! Secretary of State, Bev Clarno, welcomed everyone to the ceremony. Boy Scout Troop 150 from West Salem presented the colors and led the pledge of allegiance. My friends, Swathi, Annika and Tripthi, sang the national anthem. Deputy Secretary of State, Rich Vial, did the invocation. Governor’s legal counsel, Misha Isaak, Representative Courtney Neron, and Chief Judge of Court of Appeals, James Egan, explained to us about the three branches of government- The Executive, Legislative, and Judicial branches, respectively.

Mary Beth Herkert introduced everyone to the Kid Government program and how it started in Oregon, three years ago, with the intention of imparting Civics education to children. She then introduced the seven finalists from the 2020 Kid Governor elections and recognized them for their leadership and community service. Erikka Baldwin, Oregon’s Kid Governor for the year 2019, talked about her experience of and accomplishments during her one year term. 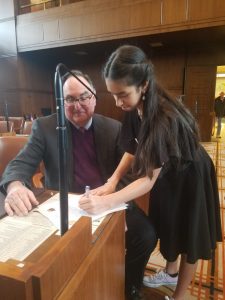 It was at that point that the retired Chief Justice of Oregon’s Supreme Court, Paul J. De Muniz, led me in taking the oath of office. My parents and grandparents were there standing next to me. I had my left hand on the holy Hindu scripture, Bhagvad Gita, that my dad held in his hands. I raised my right hand, followed Chief Justice De Muniz’s instructions, and I made the official promise to faithfully discharge my duties as Oregon’s Kid Governor, to the best of my ability. I felt pride, and an even bigger sense of responsibility as I delivered my first speech as Oregon’s Kid Governor.

So, what did the path look like for my journey from being an ordinary school girl to becoming Oregon’s Kid Governor? Becoming a change maker is actually easier than you think!