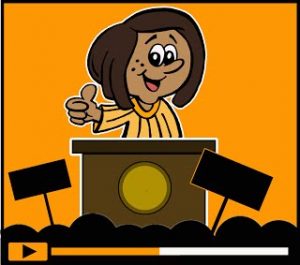 If you have students who are enthusiastic about leadership and eager to better their community, encourage them to run for Oregon’s Kid Governor®! The election for Oregon’s Kid Governor® is open to all 5th grade students enrolled in a public, private, parochial, magnet, charter, tribal, or homeschool program in the state of Oregon. Each school or group in Oregon is eligible to offer one (1) candidate to run for the position of Oregon’s Kid Governor®. Classes may choose to participate without nominating a candidate as a “Voting Only” class. If multiple students in your class/school are interested in running for office, we suggest holding class-wide and 5th grade-wide primaries.

Students interested in running for office must agree to serve as Oregon’s Kid Governor® for a full year beginning in January following their election.

Candidate videos MUST NOT:

The winner of the 2020 Oregon’s Kid Governor® election will serve from January 2021 to December 2021. There will be opportunities throughout the term for the Kid Governor to meet people and share the winning campaign platform and ways to take action.

The above are the official duties of the Kid Governor®. Anything the successful candidate would like to do outside of these responsibilities, in an official role as Oregon’s Kid Governor®, requires express written approval of the Office of the Secretary of State.