Can you imagine, it has been one month since my Inauguration!! Time sure flies. I have been wanting to do a blog entry about my Inauguration so better late than never.

The date of February 8th was finalized for the inauguration and preparations were underway. This year it was going to be an event on zoom and not at the Capitol . That made me a little sad as I would love to visit the Capitol. As the day came closer, my anticipation grew bigger and bigger. I couldn’t wait for the big day and my mom had told me “With big privileges comes great responsibility.”

Finally the day arrived, As I was getting ready for my Inauguration I went over my acceptance speech in my head. My parents asked me to relax and savor the moment. I thought about my speech, my oath, the press questions, but most of all I thought about how nervous I was. 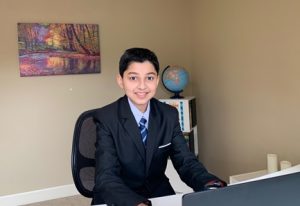 Soon it was time to log in to the zoom and I was getting more and more nervous. The event began and first our honorable Secretary of State, Shemia Fagan, gave the introduction. Then Dom, the 2018 Oregon Kid Governor and Erika, the 2019 Oregon Kid Governor started the Pledge of Allegiance.

When they finished, my class sang the national anthem. I was so happy and grateful to see my friends and teacher come support me. After some silence Dr. Chuck Currie started the Invocation. Our Honorable Secretary of State, Shemia Fagan talked about the Kid Governor Program and Representative Janelle Bynum talked about the legislative branch of Government followed by Chief Justice Paul De Muniz talking about the Judicial Branch of Government. It was interesting to learn about the branches of government.

Next, Mary Beth Herkert talked about the Kid Governor program and introduced the six other finalists, Lohith, Abhi, Ruthie, Brennah, Evi and Phia. They talked a little about themselves, their community Issue as well as their plan. I think they all have amazing platforms. After that Mary Beth introduced Raaga Mandala the 2020 Oregon Kid Governor. Raaga gave her farewell speech and I couldn’t help but think of the inspiring job she had done as Kid Governor.

Finally it was the time for the Inauguration Oath. At that time, my family joined me and my little sister held up the Bible for the Oath. The time had finally come and I repeated the oath after Chief Justice Paul De Muniz with my hand on the bible and I officially became the 2021 Oregon Kid Governor. It was a surreal feeling. I suddenly felt all motivated and made a promise to do my very best in this role. As I delivered my acceptance speech I could not help but think that I was now officially the 2021 Oregon Kid Governor and really felt grateful. When I finished, our Secretary of State, Shemia Fagan closed out the ceremony with some great words. I was so happy that she mentioned some of the things from my speech and also remembered the name of the club (Club Be You). I felt special. I then got ready for the press interview.

They asked only 4 questions and it was easier to answer than I thought. When I left, I felt so relieved that everything went well. All the nervousness had melted away. It was such a good feeling and I was getting more excited to start my term. Hope I can live up to the expectations.

A BIG Thank You to all the wonderful 5th Graders across Oregon who participated and voted.