Hi, Its Emerie! One of the highlights of being Kid Governor was getting to go on an exclusive tour at Greenhill Humane Society in Lane County. 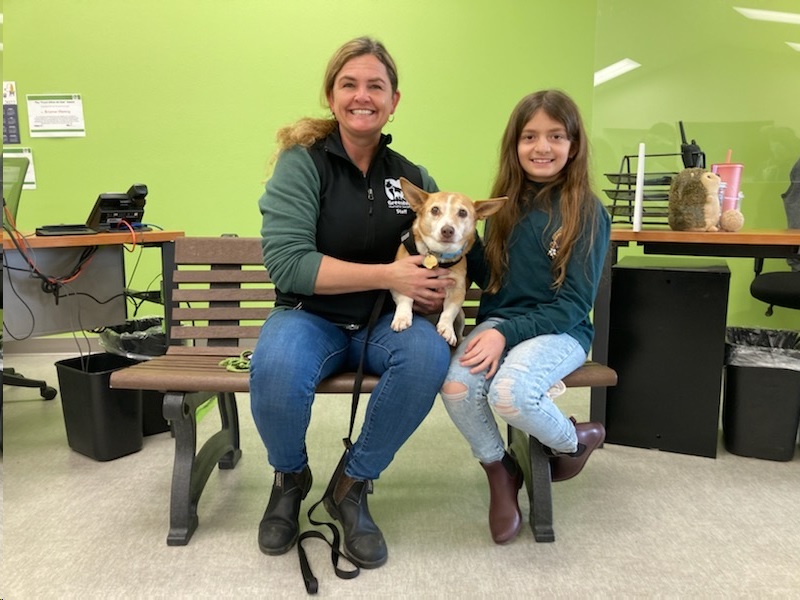 I met Megan, Greenhill’s education manager, and she showed me all around Greenhill and the animals inside. Megan was so helpful and nice, like the other people that work there. She’s funny too. And I like how she supports me in my cause! She also has two dogs of her own that she rescued! 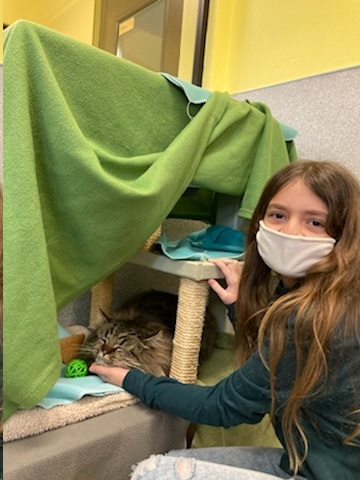 Now more about Greenhill. I met an adorable and very fun, and very loving, cat named Phoenix. Phoenix is a fluffy orange cat that had been adopted and returned several times. He had been returned because he had bad skin allergies, which meant it was hard for him to be around certain things. He was so friendly and very energetic. He had a pretty big space all to himself, where he had things to climb on, a cozy bed and this huge spinning wheel that he actually ran in. It was exactly like a hamster wheel, only bigger! There were several other cats in different rooms, all waiting for their chance to be adopted.

After the cats I saw where they keep bunnies and other small animals, like guinea pigs! I got to see two, that came to Greenhill together, and will be adopted together. The Dad’s name was Soup and his baby was named Spoon. 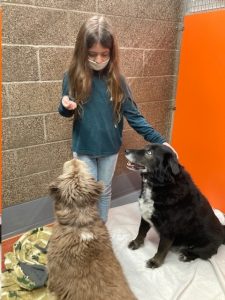 I then got to go to the kennel area where they keep dogs. There were older dogs and puppies. Some were waiting to be adopted, others were temporarily there for what Greenhill called “crisis care boarding,” which is a program for owners who are in crisis situations like domestic violence or hospitalized.

During the tour I also learned so much about how Greenhill treats the animals in their care. While visiting the dogs, Megan told me that they don’t discipline their animals when they’re bad, instead they reward them when they are being good, with treats! She called this positive reinforcement. Megan also told me that if an animal doesn’t get adopted (or keeps getting returned, like Phoenix) that they don’t euthanize them. She said that those animals get to live out the rest of their lives there, being loved like family. That’s because when an animal is at Greenhill, they are family!

I also learned that Greenhill, like many humane societies, is a nonprofit. That means they rely heavily on donations from people just like us. I was excited to hear that because that meant I have the opportunity to help them. As part of my three point plan, I want to do an animal supply drive at my school. This is perfect because Megan said that they always need new toys and beds, and food to add to their animal food pantry (this is free for owners who don’t have enough money to buy food for their animals).

Going on this tour was so fun and I learned so much! I am glad to have met Megan and all the animals there and I can’t wait to get to work on that supply drive at my school!