I am super excited to share that just a few days back I met Governor Brown!!! The Governor of Oregon. Can you believe it?

My nerves were on top gear as the time came closer and closer to 4:30 PM. I was going to meet the Governor! Before I knew it, it was time to log on. I logged onto the zoom and saw Nikki Fisher. I said hi and seeing her made me calm down a little.

I waited and then finally Governor Brown joined. I was so excited and nervous at the same time. I felt very grateful that she took the time out of her busy schedule to meet with me. Governor Brown asked me some questions and I answered them as best I could.

I then gave her a brief update about how the Kid Governor initiatives have been going and about all the things we have been doing in our school and community.

I was also given an opportunity to ask Governor Brown questions that I had in mind such as what was the most challenging thing she has faced to date during her term. What is the role of the governor and how does she work with the legislators and other statewide elected officials? I also asked her about her pets.

She explained a lot of things in great detail, such as the most challenging thing that she had faced was tackling the wildfires and the ice storms during the pandemic. She also taught me a new saying –“Throwing spaghetti at the wall”. She was so kind as to explain the meaning to me as well.

She also explained that as Governor her main goals are to work with other legislators by passing or vetoing laws. She is always seeing how to best help the state grow. She also tackles how much money to put into certain things in the government.

I also learned that she has a dog named Jory and a horse as pets. That is pretty cool right!! 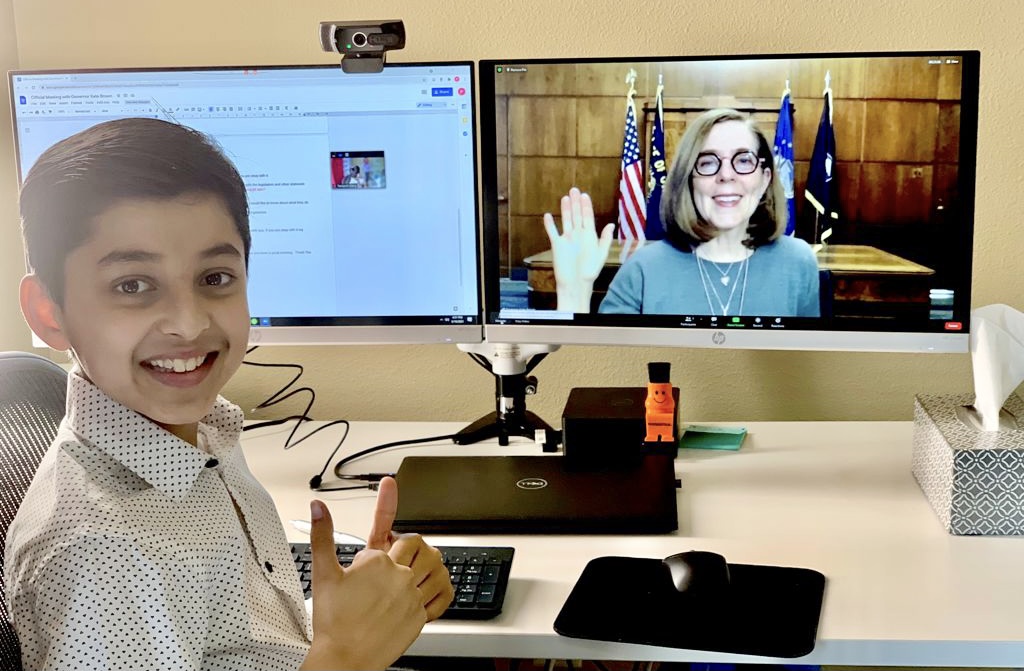 I listened carefully as I did not want to miss a word. When the time was almost up I asked her if I could have a picture with her. I was so excited when she agreed. I put a thumbs up still digesting the fact that I was going to have a picture with the Governor of Oregon!

Soon it was time to leave, I wished I could stay longer but the Governor had a very tight schedule so I said goodbye and Thank You. I logged off and was like Wow!! I just met the Governor of Oregon. It was a wonderful opportunity.

It was a really cool experience meeting the Governor and I can’t wait to meet her in person.