A couple of weeks ago I met with Attorney General Ellen Rosenblum. Can you believe it? I am so grateful that she was able to take some out from her busy schedule.

I had been waiting very excitedly for the last 3 days for this meeting and finally it was so close. Soon the time came to join. I didn’t think that my excitement could wait any longer. When I joined, Nikki told me that Attorney General Ellen would join soon.

When The Attorney General joined I took a deep breath and got ready to speak. Nikki then told us about the agenda of the meeting and then turned it over to me.

I talked about my platform, my 3 point plan and what I’ve been doing till date and some things that I am working on during this summer. When I was talking about everything that has been going on, I realized that it was almost 6 months since inauguration. The thought brought a smile to my face.

It was time to ask any questions I had. I had some questions in mind that I was so wanting to learn about such as “ What is the role of the Attorney General,” “What was your most proudest accomplishment in the past legislative session,” “ What was the most challenging part as Attorney General.”

The Attorney General was so kind to talk in detail about each of my queries . Some interesting facts I learned that I would like to share with you :

The Attorney General is like a lawyer who provides legal advice to the State.
Oregon Department of Justice is led by the Attorney general and is the largest law firm in the State. The 300 lawyers in the Department of Justice represent every agency of the Government.
Another important part of the attorney General’s job is to be “People’s attorney” and by that it means that she looks out for the people of the state who is the most vulnerable.
Consumer protection is also a big part of the Attorney General’s job, looking out for people who are most vulnerable to be scammed. It could be kids, seniors, immigrants or just about anyone.

I also learned that the Oregon Department of Justice has taken up a multi-year long project and created a task force for addressing Hate crimes and Bias incidents in the State. A hotline has been started and that means that anyone who feels targeted because of their race, religion etc, can call / email and they will be responded to and will receive services to address the issue and get them the help needed. This project was advocated by The Attorney General herself for the Civil Rights division.

We moved on to talk about The Attorney General’s favorite accomplishment. I was surprised to learn that the average amount that Oregonians owe when they finish college is around Thirty thousand dollars which has to be paid back. In the past legislative session, The Attorney General’s office was able to build a Student loan service program to provide licensed servicers to students/former students to help figure out how to pay back the debt effectively. This will definitely help so many students to start their professional life at a great note. 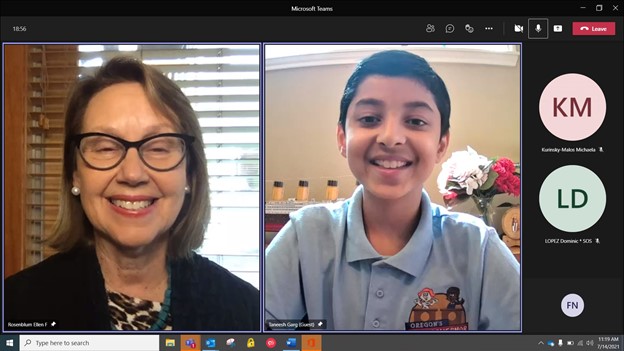 We had some sweet surprise visitors as well. I was given the wonderful opportunity to meet Attorney General Ellen’s grandchildren. Charlotte and Benjamin. We talked a bit about how the Oregon Kid Governor elections work.

After that Nikki helped click some pictures. I couldn’t believe I was going to have a picture with the Attorney General!

Soon it was time to leave and we said goodbyes and ended the meeting. Looking back I feel blessed to have had this opportunity to meet the Attorney General of Oregon . I hope I can meet her again in person sometime..

One thought on “Meeting with our honorable Attorney General of Oregon”